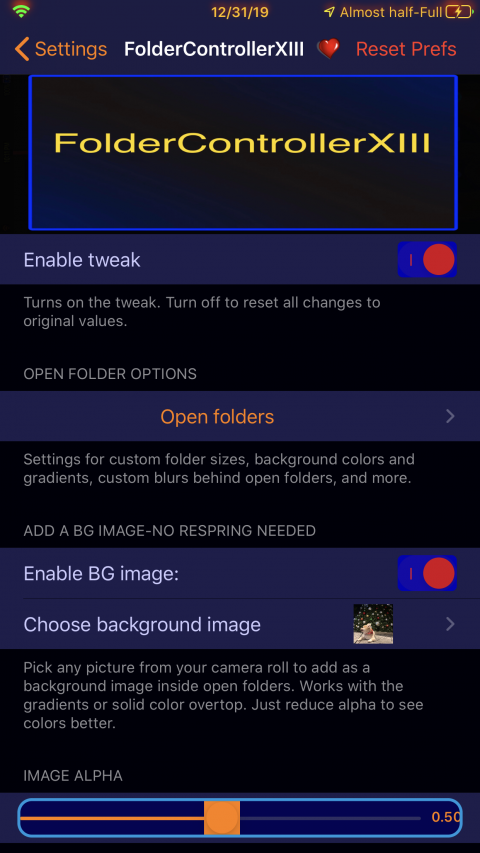 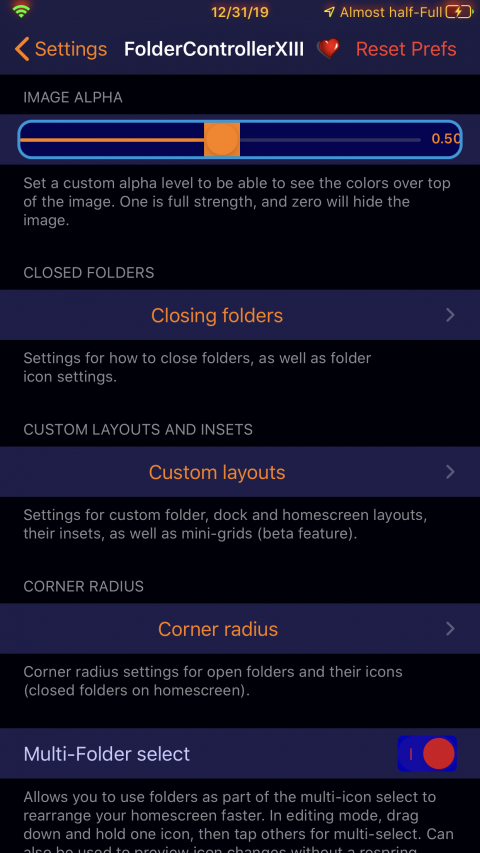 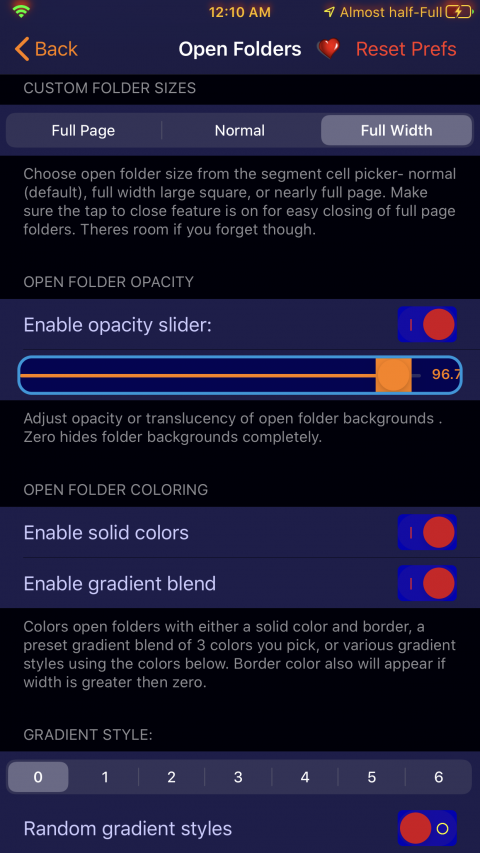 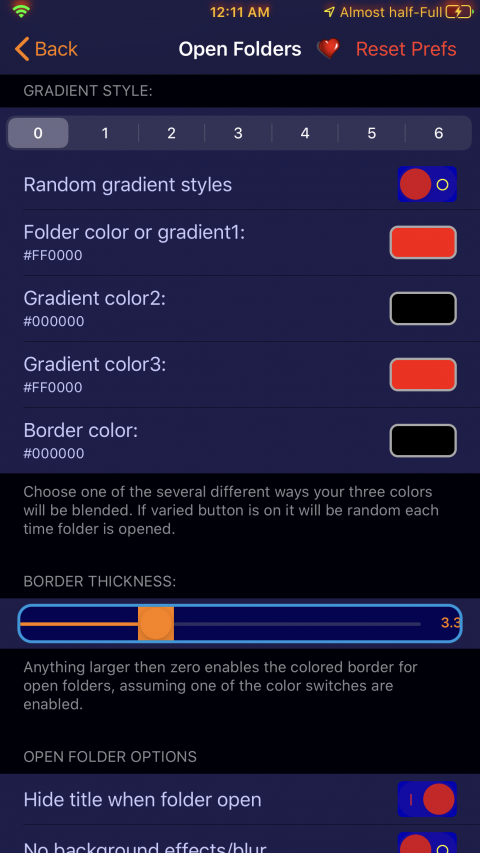 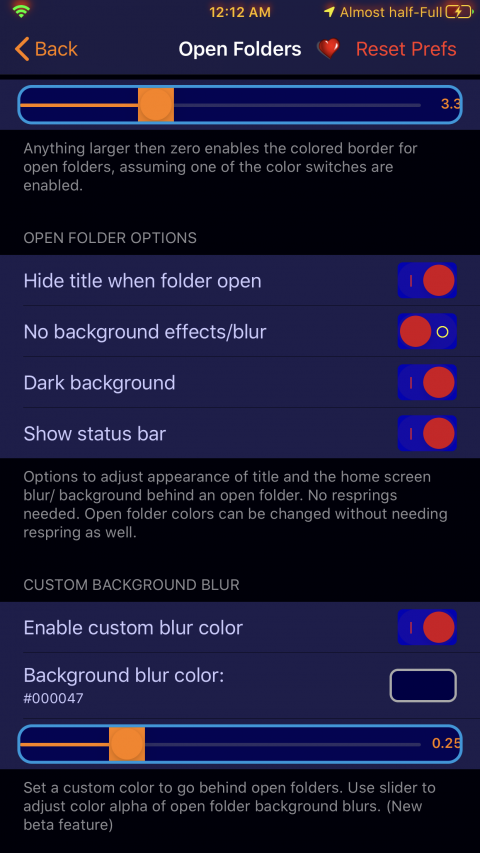 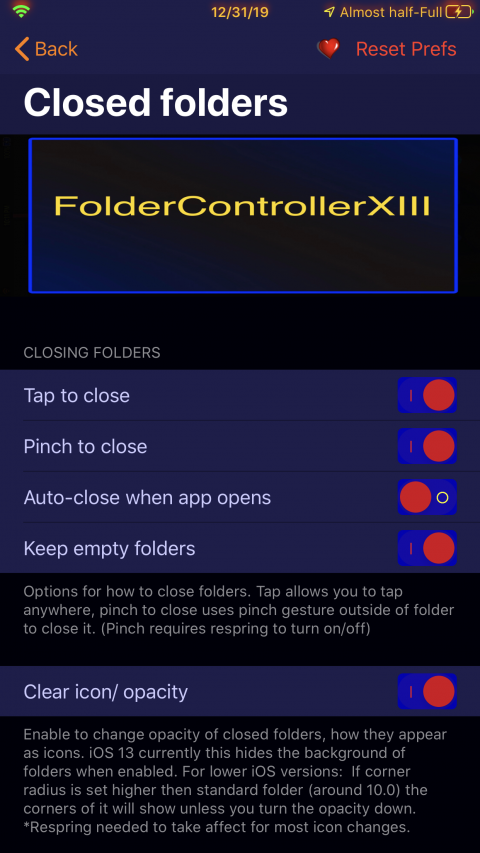 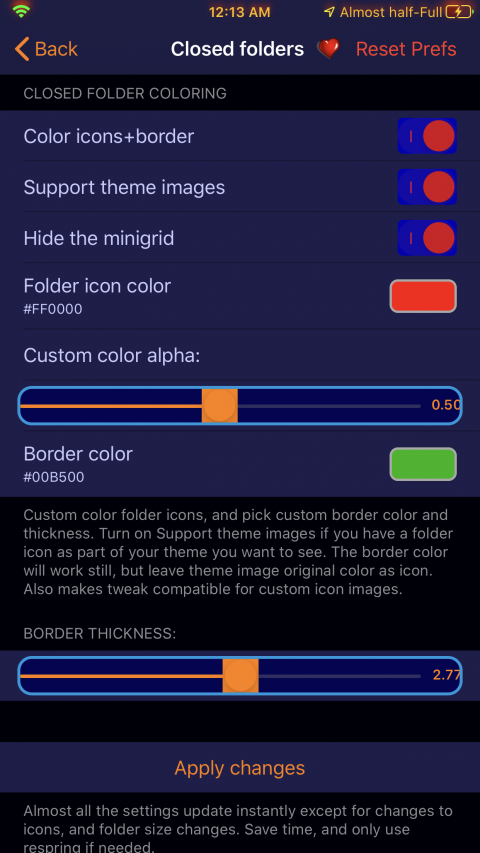 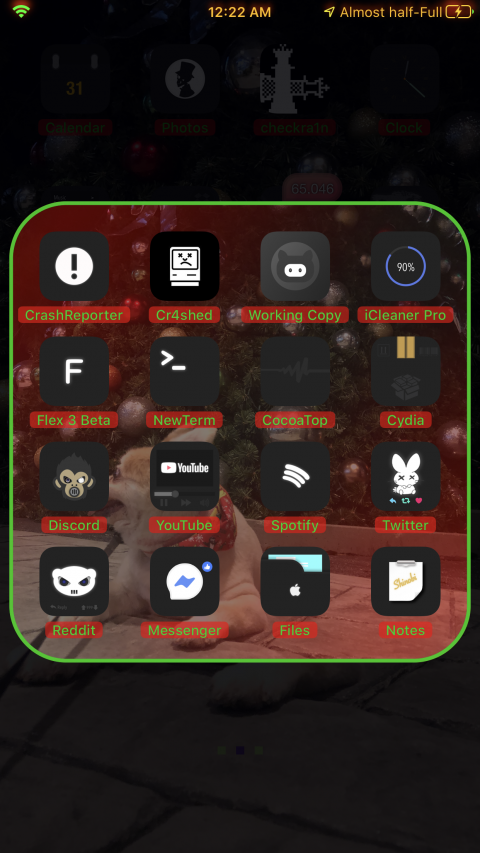 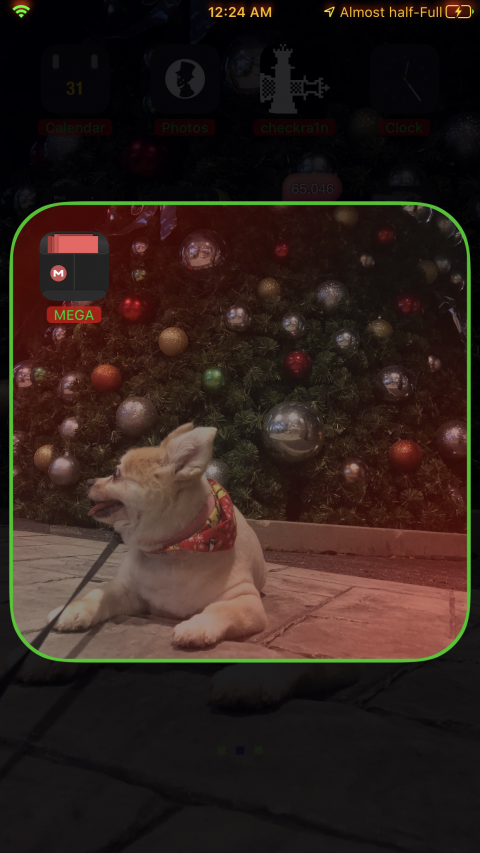 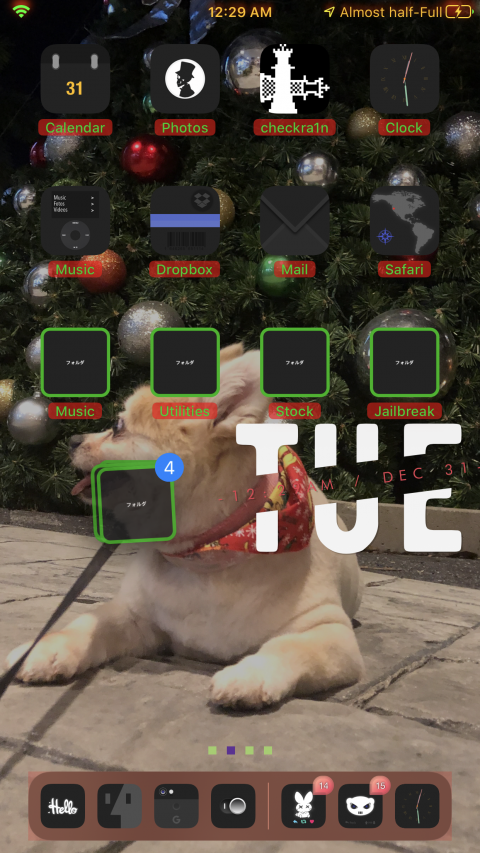 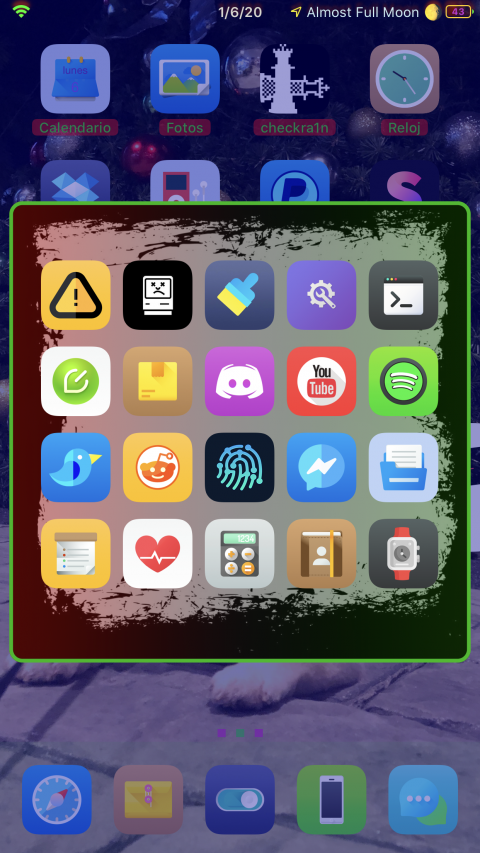 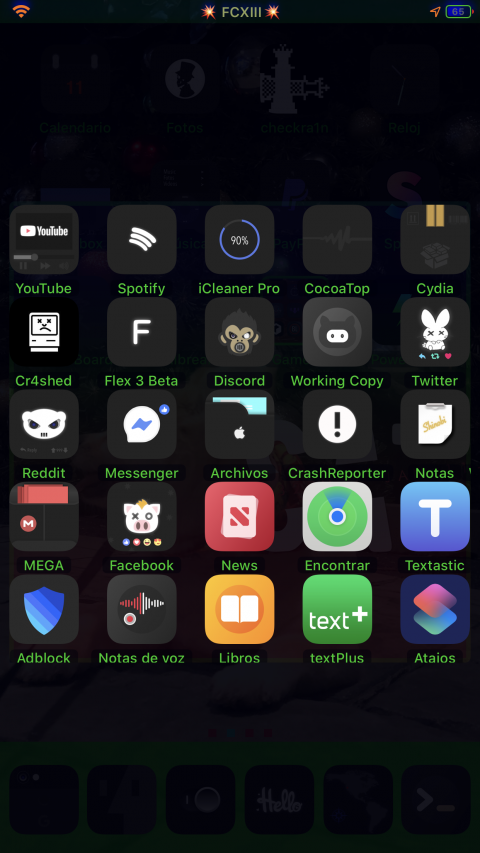 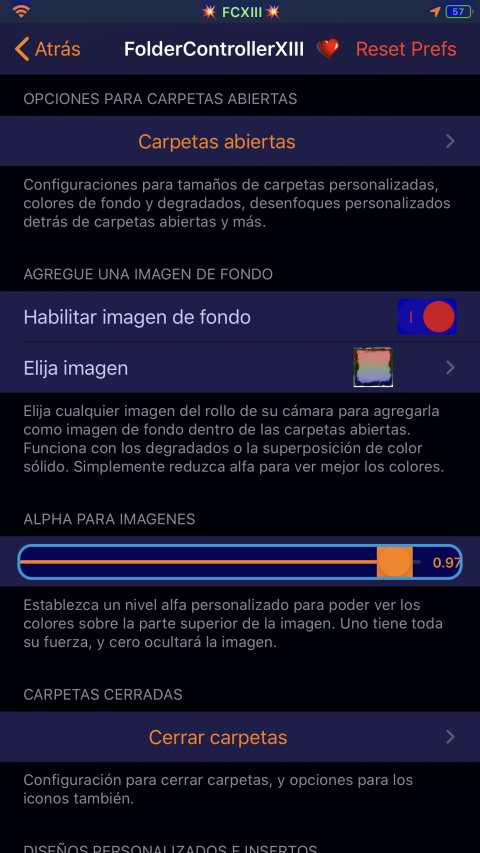 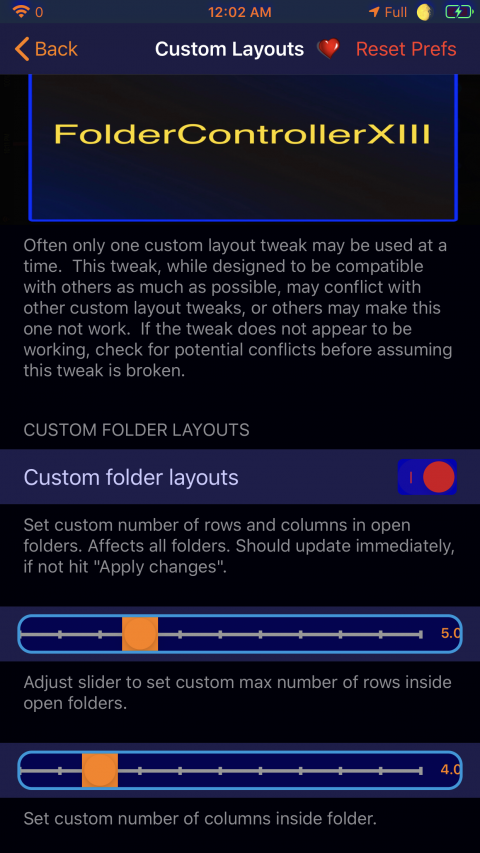 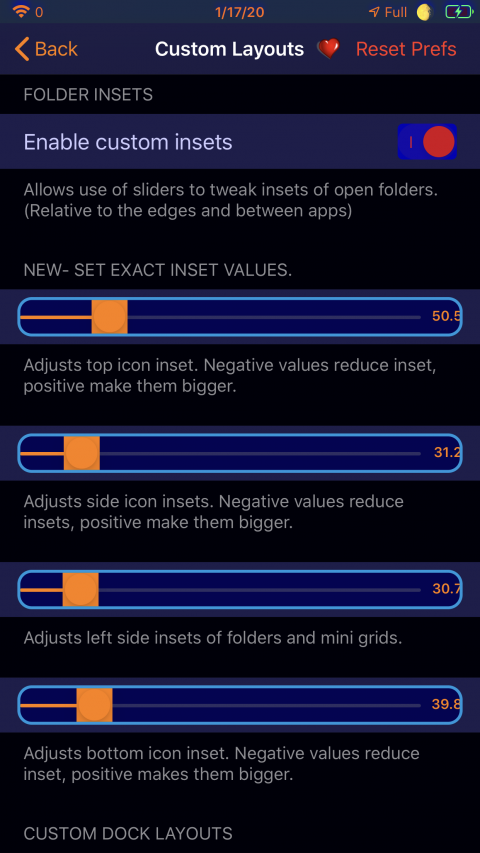 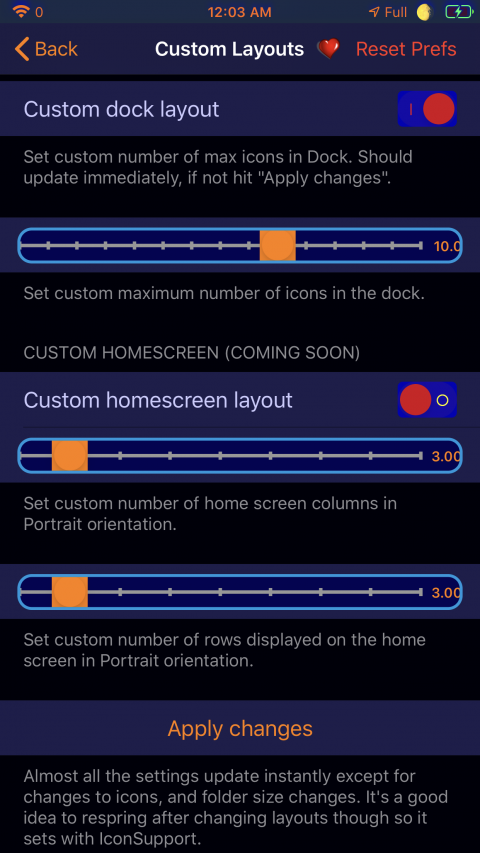 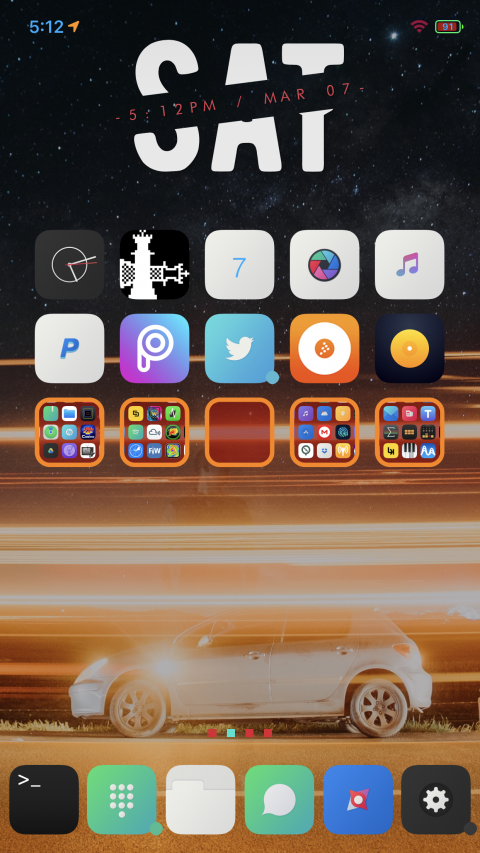 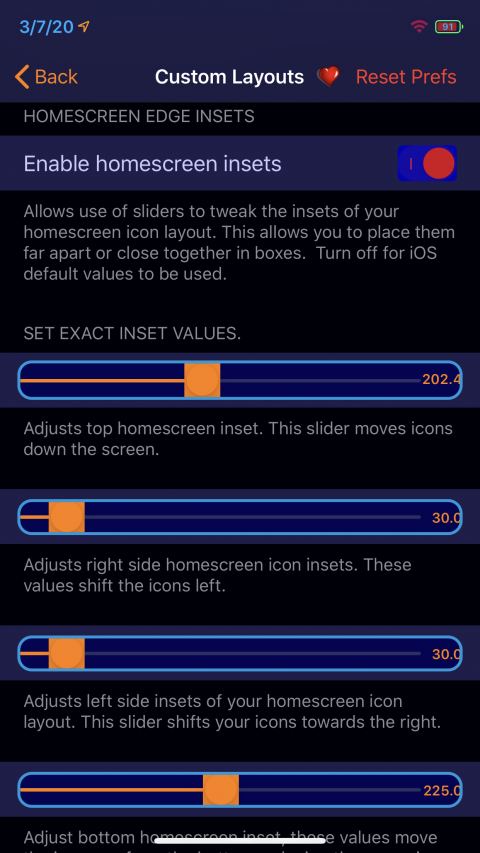 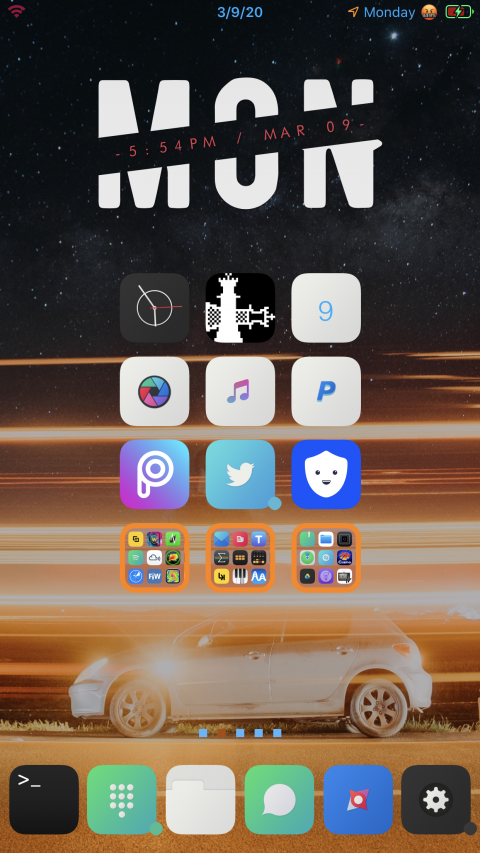 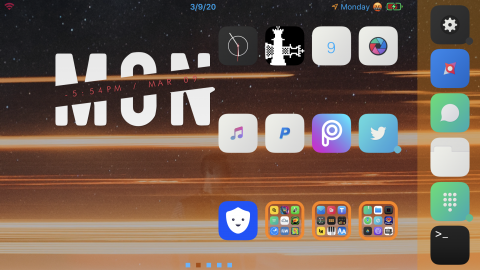 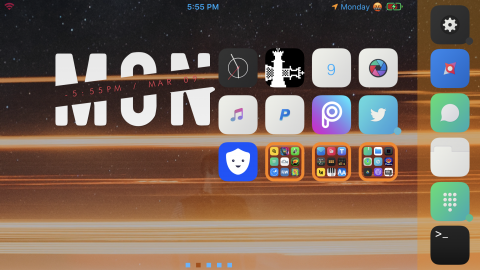 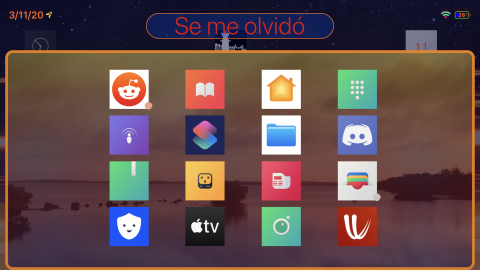 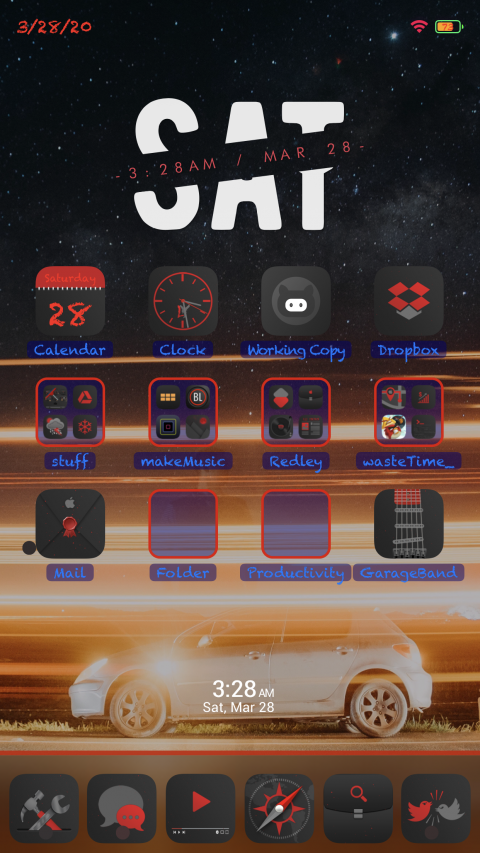 This is the most current version of FolderControllerXIII (same as Packix) for iOS 13. It’s been a long road to get this far, as nearly everything has changed since iOS 11+12. It is now a full custom layout tweak with custom insets, similar to Boxy but with so many more customization features it is not only the best folder tweak for iOS 13, it’s the best layout tweak as well. Custom homescreen, dock and folders, so there’s no need to have any other layout tweak installed. It even has full support for iPads.

The finished tweak will be $1.99, but half price for anyone that bought FolderControllerXII. All iOS 13 updates from here on out will be free after purchasing this package. I feel bad charging users who bought FolderControllerXII, but the tweak literally had to be re-written from the ground up, and it took a year to write it the first time.  There’s so many new options added also it’s become an entirely new tweak. I’ve spent countless hours researching and working on this tweak since the day iOS 13’s jailbreak dropped, and have made hundreds of test builds. This was the first tweak with custom layouts for folders, yet I didn’t release it in Packix because I wanted it to be the best possible version for release. It has finally reached that point, all that’s left is finishing translations and a few finishing touches.

Some new features in this release include an image picker to add custom images inside folders, custom layout of dock for number of icons allowed (compatible with FloatyDock), custom layout of homescreen icons with custom insets and an alpha slider for the custom image so you can add gradients or a solid colored view on top of the image acting as a custom filter, fully custom frames for open folders with the title moving up as height increases, iOS 9 style open folders, mini-grid resizing so you can take control of your mini grid layouts as well, even achieving a 2x2 mini grid. There’s countless title customizations like font size, color, background color of any alpha, plus border size and color. Like the previous version, this tweak has custom layout of number of rows and columns in folders, fully custom frames plus 3 preset folder sizes to choose from, custom inset tweaking to get the icons just where you want them, and lots of small features you never knew you needed until you get used to using them.

Known bugs: Some themes with Folder images break the corner radius and make it zero for the border, but the icons look normal. Most themes are unaffected, though.

Update: PrimalFolders2 is NOW COMPATIBLE for using the first icon in the folder as the folder image.

Partial Conflicts: HomePlus and Boxy cause the custom layouts to not work correctly, as will any other sort of layout tweak. Other folder tweaks besides PrimalFolders2 may or may not work. There shouldn’t be much need for one as this tweak can do anything the others do and more.  If you have a feature not working from this tweak or an issue, try disabling or uninstalling other tweaks with similar functions.

You can do a lot with this tweak with very few bugs if you try out the settings until you find what works for you.  Before assuming something doesn't work make sure you don't have any similar or other layout tweaks installed. This gets tested heavily before each update, and videos showing it working can be found on my Twitter page @BrianVS Any issues not listed please report via DM on Twitter, through the in-tweak tech support, or email through Cydia. Comments on the tweak depiction page are not going to be helpful at all in solving your issue.

Translations are partially included, Spanish, Italian and Mandarin are almost fully translated(except for most recent new features), Arabic and German are almost done, and there's some support for Turkish and Russian as well.  More work will be done to update translations as well.

This tweak just keeps getting better every update. Look out for custom icons and other neat features in the near future.  This is finally at a point that I no longer consider it a beta, I just have to finish translations and make the settings better organized and it will be ready for release in Packix.

NOTE: If you are still on iOS 11-12.4.4, I haven't forgotten you, and your updates will be free as long as you are on those iOS versions.  Be on the lookup for a sweet update of FolderControllerXII if you are still on 11 of 12 and bought that package. It’s live in Packix and YouRepo.

V1.0.0 Removed the beta from version number, as this is now the first version submitted to Packix. Removed partial conflicts so users are able to use HomePlus or other tweaks (that conflict with many layout features) in case they aren't using full custom layout from this tweak but want it for other features that are compatible.

V1.0.0b-94 Added extra resizing slider to make it possible for all sorts of new custom minigrid layouts. Added custom drag delay so you can start the drag and drop icon re-arranging much quicker. Fixed the majority of the Snowboard issue. When "support theme images" is off it will not display the folder theme. When it's on it will, if the theme has a folder image. More localization work done. Lots of testing and gettting ready to add custom scaling, just left it out of this build until it's better tested. Should be a nice update. A better one will be coming soon, though.

V1.0.0b-83 Completed spanish language localizations. Added corner radius to background images so it doesn't stick out if colors are off. Enabled borders by default on all open folders if border width is greater then zero. Added new Title Settings page inside Open Folder settings page for better organized settings, and to have all the title options in one place. Various small bug fixes and optimizations.

V1.0.0-b75 Re-added the option the display the status bar in open folders(I accidentally removed that setting in the last update- you may not have noticed because it still showed whatever previous setting you had. Now you can change it though.)

Added most Spanish localization updates on the "corner radius, title and animation" setttings page. Changed full page folder's title placement in portrait so now the title can be seen in any orientation with that option.  Added a switch to enable background color for the titles, so it's not on by default once you enable the other title options. (Often the title will fit and look good without the background color in tight places, so it's off by default.)

V1.0.0b-74 Fixed folder theme images not appearing, they still reset corner radius to zero, but it's progress. Added fully custom frames with titles that move according to how you adjust it, changed title placement in landscape for a couple presets, added iOS 9 style open folders, added mini-grid resizing so you can get 2x2 or almost any custom mini-grid- they update instantly so you can play with the sliders. (They are in custom layout page) I got 2x2 minigrid with a 4x4 open folder using value of 1.61)

Lots of other improvements. I'm going to re-organize the settings some so they are easier to access and understand, work on translations and the tweak should be ready to release in Packix soon.. Hope you enjoy the update. More coming soon.

V1.0.0b-55 Removed IconSupport and IconSupportFix (you can uninstall them now) as dependencies, replaced with IconState by Nepeta compiled inside the tweak so you don't need to find the repo for it. Also added customized titles- background color with alpha, font size, title color, text alignment, corner radius of view, border color, border width, etc. (It's all in corner radius settings for now.) Also added landscape inset sliders for open folders, so you can have completely custom folder layouts in any orientation.  More frame options for open folders coming soon.

V1.0.0b-48 Fixed landscape insets by adding separate inset sliders, so now homescreen layouts are completely custom in any orientation. Updated Mandarin translations for some features as well as Spanish, and re-worded some English settings to make more sense.

V1.0.0b-43 Added custom homescreen layouts and insets. It's working great in portrait mode, the insets are still a WIP for landscape mode. Make sure you don't have any other layout tweaks installed if you wish to use these options.

V1.0.0b-40 Fixed full page folders not rotating correctly, also made all folder size changes instant. No need to respring to change folder sizes. Will probably be adding a fully custom size as well soon. Worked on minigrids some more, and homescreen layouts, but still have homescreen layout disabled until it's less buggy.

V1.0.0b-32 Fixed annoying clipping issue for gradients on regular sized folders, as well as custom images. Those features work perfectly with all folder sizes now. Added option to skip folder opening animation as well as options to customize it, or keep it how it normally is.  (Those options are on the corner radius settings page). Various other bug fixes. Added option to hide badges from folder icons, but show them still inside open folders.

V1.0.0b-23 Now there is complete control of insets, to fit icons wherever you want inside a folder with an image, or regular background. Added extra slider so there's right side, left side, top and bottom each go from zero to 250. Still working on grids and adding custom icon images, but wanted to get this version up in the meantime as it's what I'm using. Arabic translation is updated, going to need to change all of the inset strings, but it's easy enough to understand. The further right the slider the bigger the inset. Icons will rescale smaller if you make it insanely big in a small folder. I use it for full page portrait on a device I don't rotate much, and full width on my device I like using AutoRotate with on iOS 13.  Big things coming soon. This is a little rushed since I want to finish updating iOS 11-12 version for people still on it.

V1.0.0b-18 Gave up to 25% more control of insets in folders, to help space icons further or closer together. Arabic and Italian are pretty much translated now as well as German, justification t need some small corrections/ missed strings.  Folder's and grids are looking really nice with the inset control. I'm loving 5x5 at the moment on iPhone 7+, with full width folders.

V1.0.0b-17 Added custom inset tweaking for open folders. Have top, bottom and side insets. Going to change side to left/right, and separate Portrait and Landscape next update.

V1.0.0b-13 Changed max rows and columns in folders to 12. Now you can have up to 144 icons per page inside a folder. Since icons resize if they don’t fit you don’t need an iPad to hold crazy high number of icons.  Experiment with number of rows and columns to get the mini-grid you like best. Usually odd column numbers will make it 3 columns in minigrid and stay in bounds, but other combos can look good too until I figure out custom minigrids implemented.